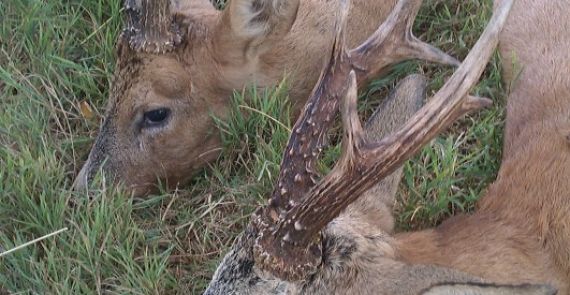 Who says France is just for lovers? It is for hunters, too!

One of the benefits of hunting in Europe is the exposure to history.  I got my first taste of Continental hunting served up with a dash of history when I was stationed in Germany with the US Army in the early 1970s.  I found that I enjoyed it and have been tramping around the Continent ever since.  The best times to stalk roebuck are in the Spring or early Summer ( April through early June) and again at the time of the rut, late July and early August.

My most recent excursions have been to  France.  The first time in October and on the second trip, June.  Before  my arrival, all I knew about French hunting was the long history of “parforce” mounted pursuit of stags and the French love for wild boar hunting.   This was Gaul after all, the country of Axterix and Obelix!   I answered an ad from Diana Hunting Tours a couple of years ago which lead to a three day roebuck stalking session near Auch followed by a few days in the Mid Pyrennes stalking the red stag.  Two years later, I returned for roebucks only, with the private hope of bagging a boar.

I got more history than I could digest and some of the most memorable hunting experiences of my life in France.Southen France, in particular, with the Pyrenees often in view.  Mix the tribe of the Vascones, the regions of Bearn, Basque Country, Aquitaine, before and after the Roman conquest, the Kingdom of Navarre,  and Gascony all together    then throw in a couple of famous kings born in Pau, the Good King Henry IV of France and  King Karl Johan of Sweden, born Jean Bernadotte,

and you get a historical “soup” that is almost too thick to spoon.   For the topping,add  the saga of the Mann family escaping from the Nazis by climbing over the Pyrenees    and you have a soup for all seasons.

On my first trip, I landed at Toulouse, the home of the Airbus, and hunted the roebuck on the rolling fields and creeks near Auch.  It was after the grain harvest and not a “classic” time for roebuck stalking, but the game was plentiful and the hunt was successful. On the second trip, I landed in Pau. The two kings hometown. My guide picked me up the next morning for the short trip to Poudenx and to my hotel. Again, I found great French hospitality, clean comfortable quarters and great food.

Off for an evening stalk with Frederic.  Short stop for a test shot. It was about 2”hi, but I thought for shooting from over the hood of the Suzuki, the rifle was on.   Then, when the time came, I missed the first buck.  Too high.  Back to the range. This time I shot twice.  Tight group, but 3” high.  I clicked the scope down a couple of  clicks and was on the bull's eye.  I still do not know the science behind the difference in impact from at home 1” high and in Poudenx.   Happily, there were no futher problems.

This area was had much more vegetation that at Auch.  Oak forests and small meadows and fields. Perfect roe deer country.  We always saw many animals, but far more does than bucks. That not withstanding, I did fine.  We even managed to discover a Rotte  of boar at the edge of a forest one evening.  I bagged a big one, but it was a sow with no tusks.

But Fortune is fickle.  Sometimes she is with the quarry, and sometimes with the hunter.  Up until now, I thought she was giving me the “Fickle Finger of Fate” but work duties took Frederic back to his shop and Lucas took over as the guide.  The day before, he had seen a good buck and wanted to take me to see if we could find him.

We stalked over a kilometer, maybe two, always going uphill through the forest. Then we came to a series of small meadows and small corn fields.  The corn was about 12 inches high.  We stalked extremely carefully.  In the tall meadow grass, Lucas saw ears.  A doe.  She saw us, too, but could not wind us and she soon lay down again.  No buck stood  up.

On to the edge of the corn field the forest jutted out into the field like an isthmus. This place became our stand with our view  to the East.  The sun had just gone down.   On the very first glassing of the corn field Lucas got a bit excited and set up the shooting sticks.  Meanwhile, I could see the buck, too.   He was bedded down between the corn rows.  I could not see any of this body, but plenty of antler sticking up.    I got the rifle settled in on the sticks and said to Lucas, “OK.  Get him up.”  Lucas yelled.  Nothing happened. He yelled again and louder.  The ears twitched.  The he really yelled very loud and there was movement.  I knew from experience, even as athletic and graceful and quick as roe deer are, they do not arise from sleep any too fast.  First front legs, then stand, and then stretch.   And old fickle Fortune, she was sitting right there on my shoulder. Up he stood.  The shot was good and the buck was down.

In 48 years of hunting roe bucks, the one that lay before me in the corn was the best I had ever seen, let alone to have shot. An old buck, with heavy atypical thick beamed antlers.  A dream buck. The buck of a lifetime! 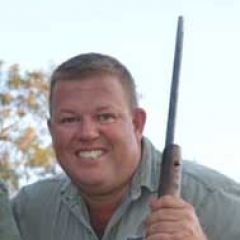 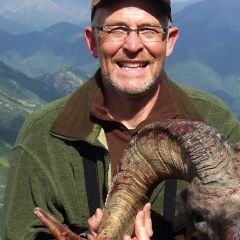