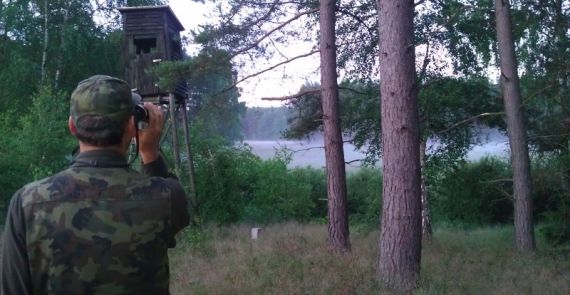 It was well organised and run under the management of the forester and very professional guides. I had booked 10 outings and one stag. After 6 outings I had 19 observations and 3 shooting opportunities out of which I was able to stalk a bronze medal stag. As we stayed at the forester´s house I could enjoy the nice park and parade from my window. The stay was very comfortable with good service (including a good interpreter) and excellent company out of which a Geman hunter was returning for the 22nd time, which is as good a testimony as anybody can get!

In the beautiful fall of Northern Europe, it is time to manage the roe deer population. In the hunting area Maniszewo alone they cull 170-200 roe does and fawns during every season. Follow Jens on a hunt for field dwelling roe deer in huge Polish fields October 2013.

One by one, the bagged deer were weighed and tagged while their weight and gender was carefully noted. We were two hunters who had been hunting for three days and when everything was accounted for, there was 286 kg’s of fine venison in cold storage destined for dinner plates all over Europe. Between us, we had managed to bag slightly less than 15% of the annual quota of the entire area.

The opportunity to go to Poland had suddenly materialized out of thin air a little more than week earlier. The hunting area Maniszewo in Northwestern Poland was looking for hunters interested in roe deer culling on very short notice. That type of hunting is always a challenge and furthermore it is very inexpensive. The fact that we were welcome to take some of the fine meat home with us just added to the attraction. Not surprisingly, my good friend Eric and I proved easy to persuade.

Furthermore, I was going on a big trip to Africa a few weeks later and I really wanted to try out my brand new rifle kit consisting of a Mauser M03 with a Zeiss Victory HT 2.5-10x50 on top. This was the perfect opportunity.

I picked up the rifle and scope the day before we headed for the hunt in Poland. Upon our arrival, we had a little less than an hour before we would head out on the first outing with our guides.
We were in luck! Behind the huge fenced garden of the guesthouse, there was a fine little 100 meter shooting range equipped with a homemade but very sturdy shooting bench. I quickly assembled the brand new rifle – it only took a few seconds – and I made a couple of crude paper targets with a ball pen on the back of some tax return slips from the bottom of the trunk. I knew that the gun makers at the Mauser factory had test-fired the rifle but I did not have a clue what ammunition they had used. I just hoped that the first shot with the Norma Oryx ammunition I had chosen for this hunt would land somewhere on the target so that I could start zeroing the scope properly.

With the rifle resting on my cap, I squeezed off the first shot. I clearly saw that the center of the reticle was comfortably within the blue ink dot as the shot rang out. I immediately took a close look at the target. Through this scope, I would easily be able to see any holes in the white paper but I found none.

We walked to the targets expecting anything. However, as we got closer a logical explanation became obvious. The bullet had punched a nice little hole in the small blue bull’s-eye exactly in the position of the crosshairs as the shot went off. Not a bad start at all! I went back and fired another shot. It also had the courtesy to land where I was aiming and thus I finished the fastest zeroing process I had ever experienced. Sometimes you simply get lucky – today it was my turn!

I matched the proper ballistic ring on the ASV+ ballistic turret to the flat shooting load I was using and felt as ready as I could be. Having faith in your equipment is a big part of any good hunting experience. On this particular hunt, I already trusted a scoped rifle that I had only fired twice!

Half an hour later, I was sitting beside Zbigniew Jania in his tiny Suzuki 4WD on our way to the hunt. The hunting area of almost 18,000 hectares was divided in five subdivisions with a dedicated guide on each. Zbigniew’s area mainly consisted of big fields and to make things worse most of these fields were newly sown, black and barren. Therefore we were also allowed to hunt in one of the other subdivisions where the fields were greener and more attractive to the deer but even larger than in my guides main area. Several of these vast green oceans in the landscape were between 100 and 200 hectares from “coast to coast” without any form of natural cover.

I gazed at the scenery through the foggy window and thought that it would not be easy to get within shooting range of the roes in this wide-open terrain. My fears proved to be very real. Plenty of roe deer in small family groups filled the fields but they constantly fled in panic several hundred meters in front of the vehicle.

My guide stopped the engine at the end of a never-ending hedge stretching hundreds of meters in front of us only to disappear behind a low hill. The enormous field was harvested but there were plenty of green weeds scattered in tuffs all over the place. 500 meters away two roebucks were staring at us. Behind them, there was a roe doe and two fawns browsing. There was absolutely no chance of getting in range of these animals but my experienced guide had another simple plan. Slowly and with the wind in our faces, we would walk along the hedge up the hill. With a little luck, we would surprise some deer on the other side of the hilltop at more reasonable distances.

We mowed cautiously forward. The bucks we had seen when we started our stalk intensely followed every step we took. We approached the hilltop. Suddenly Zbigniew froze and raised his binoculars. On the other side of the hill, numerous little groups of deer were browsing the field!

I moved behind him and followed him in a smooth silent gait towards the top. He often stopped to look at the animals for a long time before slowly moving on.  On the top, he put his three-legged shooting sticks up and used them to steady his binoculars. The nearest group of deer was foraging quite a bit in front of us. It was a doe with two fawns and a young doe from last year.

The disappointment in my guide’s voice was clear. “They are too far away”, he said.

”How far?” I asked silently blaming myself for not having a rangefinder with me.

His reply fell withour hesitation in the tone of voice you would expect from a man who has laid eyes on tens of thousands of roe deer through the years. “250 meters!” I lifted the ASV+ turret on the riflescope and turned it to the clear line between the 200 and 300 meter markings.

Zbigniew saw my move and understood immediately. Without uttering a word, he took a long step to the side to allow me free access to the shooting sticks. I placed the forearm in the fork of the sticks, turned the magnification to 10X and cocked the rifle. Zbigniew was staring at the deer seemingly very keen not to miss the show that was about to unfold before his eyes.

”The right one!” he said to let me know that we were trying to bag the young doe. Less than a second later, the blast of the muzzle rolled over the landscape. Within the time it takes to blink, we got the sound of the bullet impact in return. It sounded like a distant but heavy blow to a large drum. The deer was knocked to the ground. It got up, while the others took flight, but it fell over immediately and never got on its feet again.

A loud and spontaneous ”WOW!” was Zbigniew’s only comment.  I turned towards him and was greeted by a wide smile. Roe deer was running wild all over the field and we both saw a single doe crossing the field behind us at full speed. Zbigniew quickly moved the sticks and said ”shoot if you get the chance!”. I had dialed the ASV+ turret back to 170 meters and thus I was ready for any distance between 150 and 200 meters.

I followed the jumping roe through the scope. Just a few seconds before it reached the salvation of the hedge it made the fatal mistake that seems imbedded deeply in the genes of roe deer. It stopped to orientate. The firing pin fell instantly – and so did the deer. The distance was approximately 180 meters. I was more than satisfied. The first two shots at game with the new rifle had resulted in to fine roe does. They fell less than 20 seconds apart and yet at a distance between them of nearly half a kilometer.

The guide went to pick up the car while I went to wait by the nearest deer.

Zbigniew was there in a few minutes and he started the mandatory ceremony to honor the killed animal at once. He picked a bundle of short rapeseed twigs and placed most of them in the mouth of the roe as a last bite before its final journey to the eternal rapeseed fields. He gently dipped the remaining two twigs in the blood of the entrance wound, placed one on top of the bullet hole and presented me with the other carefully placed on his own hat. As I took it, he gave me a firm handshake and said “Darz Bór!” – an old Polish greeting between hunters. I replied using the same words and carefully placed the little twig with the heartblood of my quarry in my hat. It is a beautiful tradition and to Zbigniew there were no exceptions – all the game we killed was honored with the same heartfelt respect.

We arranged the two animals for a photograph and in a matter of a few minutes, they were gralloched and loaded on the back of the car.

During the following days I had the good fortune to bag another eight of these shy Polish roe deer. The average shooting distance was in the area of 175 meters while a few were shot at as much as 250 meters. In total, I now have 12 empty spaces in my first box of ammo for this rifle. I am fairly content with the statistics so far considering I used two shots on paper. I choose to believe that the thousands of shots I have fired on paper targets during the past few decades have somehow improved my luck.

When we ended the hunt after three short days, we arranged all the deer for a photo on the lawn in front of the hunting house. As a final ceremony, our guides played the horn signals for “roe deer” and “Darz Bór” over the dead animals. The trophies of this remarkable three-day adventure were plentiful. First and foremost there is the happy memories of the hunt and the nice trip in the company of a good friend. However, the nice photos and not least the fantastic roe deer venison that hibernates in my deep freezer are also great trophies indeed.

When I raise my glass at our dinner table to toast “Darz Bór!” in the months to come my thoughts will fly to enormous Polish fields filled with light-footed roe deer, salty guides and a rifle I could blindly trust… 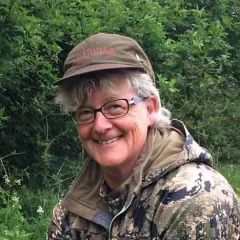 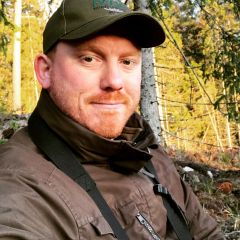